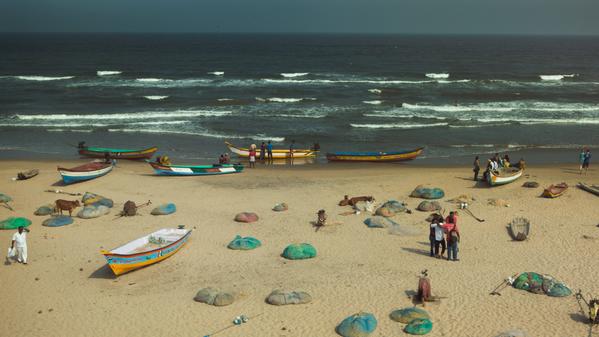 How's the weather? The best times to travel to India

India is a country of extremes, and the weather there is no exception

by Mariellen Ward Posted on 02 September 2015

India's weather is extreme. In summer, the baking hot deserts of Rajasthan can reach 50°C (122°F). During monsoon season, the city of Mumbai floods on a regular basis. In winter, Ladakh's high passes are completely snowed in.

Therefore, if you're travelling to India, it's wise to pay attention to the climate and plan accordingly. This country is incredibly diverse in terms of both culture and geography. You can find everything from tropical beaches to arid deserts, from snow-clad mountains to valleys of flowers, and from hillside villages to the world's most densely packed cities.

Here are some ideas for where to go during every season in India.

Autumn is one of the best times to be in India. It's festival time and the weather is moderate. The monsoons are over and everything is lush. In fact, most of India is pleasant during fall, so you could choose to go just about anywhere.

However, I would recommend North India, as this is where India's biggest festival, Diwali (a Hindu celebration that honours the goddess of prosperity), is most enthusiastically observed. Celebrated over five days, Diwali culminates with a spectacle of lights and fireworks.

In the ancient city of Varanasi, all the ghats (flights of stairs that lead down to the river) are decorated with oil lamps, which are then floated on the Ganges River, and a massive fireworks display lights up the sky. In Jaipur, entire markets are illuminated in a spectacular fashion, and a prize is awarded to the best one. Amritsar celebrates Diwali by draping the Golden Temple in lights and placing thousands of diyas (tiny oil lamps) around the lake in an extravagant spectacle. Delhi is also a good choice as the fireworks displays are profuse and elaborate — and go on all night.

Diwali takes place in October or November, depending on the lunar cycle, so check the date first before planning your trip.

Winter in North India is surprisingly chilly. The most northern regions like Ladakh are virtually inaccessible due to heavy snow fall, and even Delhi's temperatures can drop to 2°C (36°F). Winter is the best time to enjoy tropical South India.

South India is a region of great diversity, and there's a lot to do and see. I recommend either getting to know India's beaches or exploring some of the many fascinating historical and religious sites.

Many of India's best beaches lie along the Arabian Sea coastline below Mumbai, from Tarkarli beach in Maharashtra, through Gokarna in Karnataka, to the famous beaches of Goa and Kerala. You can simply get on and off the train, sampling them as you go.

Alternatively, you could go in search of ancient temples and other architectural treasures. Many Indian travellers cite Hampi as their favourite location in India. An abandoned city of surprising beauty and dimension, Hampi attracts a chilled out crowd of travellers and avid photographers. Other stupendous sites in South India include the Ellora and Ajanta caves in Aurangabad, the Meenakshi Temple in Madurai, Elephanta caves near Mumbai and the temples and sculptures in Mahabalipuram — to name just a few.

Spring in India is hot, with the highest temperatures usually posted in May and June. However, this is the best time of year for wildlife viewing and photography, especially if your dream is to see a tiger in the wild. During these hot, dry months animals (including tigers) flock to water sources, and therefore their movements are much more predictable.

India is home to some 60 percent of the world's wild tigers, and there is a system of about 40 parks and reserves set up throughout the country to protect them, their habitat and the many other species of flora and fauna they harbour.

Summer in India is a scorcher. Hot and dry in the north and west, and soaked by monsoon rains in the south and east. Summer is the best time to go up, way up, to the mountains.

The world's highest mountain range, the Himalayas, runs along India's border and offers an abundance of opportunities for finding relief from the heat of the plains. Hill stations like Nainital, Shimla and Darjeeling still contain enough remnants of the British Raj to give visitors a sense of that bygone era. Manali is a popular spot with backpackers, while the spiritually inclined head to Dharamsala or Rishikesh.

Hiking in the hills is another popular summer option. The Valley of Flowers in Uttarakhand is an enchanting locale that requires a strenuous hike to get there. It's at the height of its beauty from mid-July to mid-August.

At the very top of India, Ladakh's short tourist season runs from June to September. This is the best season for trekking Ladakh's stunning, high-altitude deserts.

G Adventures runs a number of departures in India encompassing a wide range of departure dates and activities to cater for different tastes. We’re thrilled at the prospect of showing you this big blue planet of ours — check out our small group trips here.