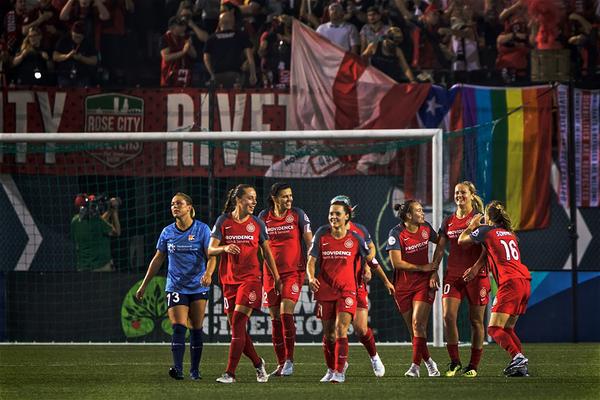 How women’s professional soccer can kickstart your visit to Portland

The Rose City has thrilling sports, game-changing books, and great food and fashions

by Lucas Aykroyd Posted on 04 September 2018

The site of the 2018 National Women’s Soccer League final offers a genuinely electrifying women’s sports experience. And a Thorns game is a great gateway to an everyone’s-welcome tour of Oregon’s biggest city, dubbed “Soccer City USA” since the 1970’s.

“It’s cool that we get the most fans of any women’s team in the world,” says Thorns player Emily Menges. “They’re amazing, rain or shine. And we often hear from young girls: ‘Oh! Girls can do that.’ Yes, they can be professional soccer players.”

Providence Park has hosted the championship-winning sister club of the Portland Timbers since 2013. Art lovers marvel at the huge, choreographed tifo displays, like 2017’s award-winning Shields Up, where Amazon warriors gripping shields loomed over the fans. You can celebrate victories with Two Thorns apple cider, made with raspberries and rose petals.

Near the downtown stadium, the Fanladen, a cozy supporters clubhouse, has Thorns and Timbers memorabilia and a library with 300-plus soccer books. Membership is just $25 a year. “You’re in as long as you subscribe to the ethos,” says organizer Sheba Rawson.

Within walking distance — the Rose City’s blocks are ultra-compact — other treats await. Chill with a handcrafted Americano at the brick-walled Coffeehouse Northwest, one of Menges’ go-to favourites. Refuel with spicy chicken and rice at the cheerful, female-owned Nong’s Khao Man Gai restaurant. Or indulge at Blue Star Donuts, whose mouthwatering flavours include Mexican hot chocolate and blueberry bourbon basil.

Raven & Rose, an English-style gastropub, is just a short hike across downtown. Constructed in 1883 by Portland mayor William S. Ladd and now owned by foodie entrepreneur Lisa Mygrant, the building is listed on the National Register of Historic Places. Buttermilk-fried rabbit with herbed aioli and sweet pickles on ciabbata is one highlight.

Powerful women appear on many Portland murals. For instance, check out the 2017 Jeremy Okai Davis mural, The Fiercest Athletes (pictured above), which portrays Sinclair, Serena Williams and other sports heroines. It’s right across from Powell’s City of Books.

This legendary downtown bookstore has some 3,500 sections with new and used books, spread over 68,000 feet. The soccer selection features autobiographies like Abby Wambach’s Forward and Carli Lloyd’s When Nobody Was Watching. You can browse through the works of Ursula Le Guin (A Wizard of Earthsea), the late Portland-based science-fiction author, or buy local magazines like She Shreds, which spotlights female guitarists.

Wildfang, a dynamic feminist fashion boutique, offers a special Portland Thorns collection, from “Squad Goals” T-shirts to “Come As You Are” sweatshirts. With Tegan and Sara’s “Closer” playing in the background, sip Underwood Pinot Gris or 10 Barrel Brewing Raspberry Crush at the in-store bar and chat with the outgoing staff.

At nearby Crafty Wonderland, Portland-themed bags, hats, cards, and soaps abound. Score a bumper sticker celebrating the 1970’s Oregon Trail computer game or a copy of Walking with Ramona: Exploring Beverly Cleary’s Portland. Cleary’s children’s books have sold more than 90 million copies worldwide, and she doesn’t just have a local elementary school and sculpture garden named after her — she also turned 102 in 2018.

Portland has made big strides in its history. That goes beyond its thrilling 1975 debut in the old North American Soccer League and the 2002 and 2005 championships won by the University of Portland’s women’s soccer team. Head to the Oregon Historical Society’s museum to see the No. 5 Blickensderfer typewriter that belonged to Abigail Scott Duniway, who spearheaded the 1912 Oregon women’s suffrage bill, and discover how equal rights were finally enshrined in the Beaver State’s constitution in 2014.

For a refreshing (and rosy) outdoor perspective, climb up to the International Rose Test Garden in Washington Park. Free of charge, it features more than 8,000 rose plants and 600 varieties, from Voluptuous! hybrid tea roses to Fired Up floribundas, and a spectacular view of Mount Hood. (Singing Bette Midler’s “The Rose” or Poison’s “Every Rose Has Its Thorn” is at your discretion.)

The Portland Thorns have taken women’s soccer to new heights, and it’s hard to leave their city without feeling like you’re on a high too.

Want to check out all Portland has to offer? G Adventures can get you there. Take a look at our small group tours to the United States here.