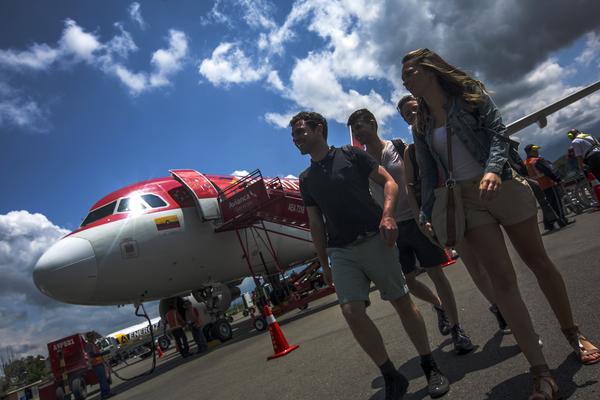 How to get over your fear of flying

Aerophobia can prevent you from taking your next big adventure. Here's how to prevent that from happening

by Sinead Mulhern Posted on 06 December 2017

Right now, travelling is easier than ever. Bustling airports shuttle eager vacationers to and from the hottest destinations on the daily; our Instagram feeds make choosing our next international adventure nearly effortless; and if money’s tight, deals and budgeting hacks online solve financial woes. It may seem that the modern-day voyager has nary an obstacle standing between them and the world’s most idyllic spots — but that’s not exactly so. Fearful flyers are a common breed at nearly every airport gate around the world. A flying phobia — known as aerophobia — sometimes even stops would-be adventurers from booking trips. Below, some ways to kick that fear:

If an upcoming holiday flight has already brought on a case of the nerves, a virtual reality session (or several) may be just the thing. One of the best ways to bid a fear farewell is to face it again and again. Logistically, that can be tough since sufferers probably don’t have the means to board an aircraft regularly. Luckily, there are plenty of online VR services that mimic the experience of taking flight. Virtuallybetter.com, for example, takes the user from the gate to their seat and uses both visuals and sound to recreate the feelings of take-off, turbulence, landing, and everything in between. Created in 1996 by Dr. Barbara O. Rothbaumt and Dr. Larry F. Hodges, this particular program — run by psychologists — is part of a series that simulates real-life environments to treat people with anxiety disorders.

Find out if the fear stems from a separate phobia

Not everyone who’s shaking in their seat while waiting for boarding has a phobia of flying itself. There’s a laundry list of other phobias that simply don’t blend nicely with flying. For example, a fear of heights, germs, vomiting, or close spaces are all anxieties that make flights stressful. Try to pinpoint the exact issue (or issues) first before deciding how to tackle it.

Scope out the airport’s calming spaces

Not all airports are sterile zones filled with intimidating security personnel and stressed-out travellers. In fact, many will have specific locations where you can take a mental health break. Finland’s Helsinki Airport, for example, has a blissful abode of sleeping pods for air-bound visitors to catch some chill time. Those on a layover at the Albuquerque International Sunport Airport in New Mexico may notice a churchlike stained glass meditation centre — perfect for some calming breathing exercises before a scurry to the gate. If you’re nervous about upcoming air travel, see if your airport has quiet spots to help you nip that anxiety attack in the bud.

There’s a class for that

Courses geared towards making time in the air less of a mental drain are aplenty. Air France, for example, has a three-hour workshop that aims to help flyers take off more comfortably. Check if yours does. Another option: visit a flight simulation centre. Toronto’s UFly lets students sit in a cockpit, learn about the operational functions of the plane, and even introduces them to the workings of a real airplane dashboard. Sometimes a little knowledge puts the fears to bed.

Put a system in place

In 2015, Montreal neuroscientist Daniel Levitin delivered his famous TED Talk, “How to Stay Calm When You Know You’ll Be Stressed”. One of his golden nuggets of wisdom is to have a system in place before the nerve-racking situation arises. When stressed, the brain is flooded with cortisol, which in turn clouds a person’s thinking — you literally can't think straight. If you know you’ll be in a tizzy upon check-in, make it easier on yourself ahead of time. Select your seat, have your passport out, bookmark that mindfulness chapter, and have relaxing tunes ready.

Delegate all control to the pilot

One of the most common reasons certain individuals don’t like flying: thousands of feet in the air, they feel too much is out of their control. On pilot Nicola MacPhail's The Flight Stuff podcast, a "Fear of Flying" episode explores one particularly handy tactic for, say, the control-freak CEO: Rather than feeling powerless, pretend this flight is something you’re delegating. Say to yourself, “This is a task I’m not up for, so I’m now assigning it to the pilot.”

If all else fails, remember that many fears stem from lack of understanding or lack of experience. If turbulence hits and your heart rate soars, keep an eye on the most experienced fliers in the vessel: the flight attendants. They’re probably cool as cucumbers, because whatever’s got you in a fret is totally normal.

Ready to take off? We book flights, too! Learn more here.