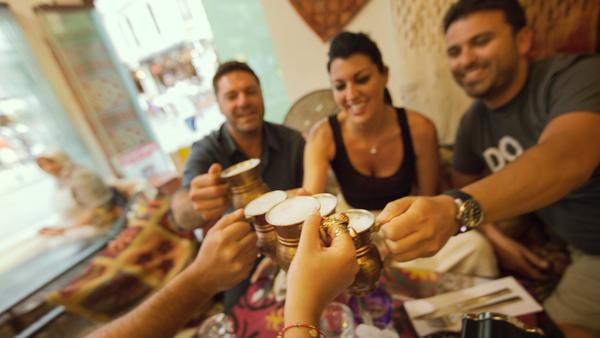 How to do Turkish breakfast right

Step one: Watch before you order

by Shayna Stevenson Posted on 28 February 2020

“I think we did this wrong.”

There’s a silence that accompanies the beginning of a disappointing meal, and we were in the middle of that silence on our first morning in Istanbul, when we saw the Turkish breakfast being brought to the table next to us.

The breakfast restaurant recommended to me by a friend, was fairly empty when we arrived, so we ordered like we would at a breakfast place at home. We got one main plate for each of us and a side to share; but when the food arrived at the table next to us, I saw the error of our ordering ways. In contrast to our two main plates, our neighbouring table was covered in at least a dozen small dishes comprising a seemingly endless variety of food, and it was a thing of beauty.

Yes, we had definitely done this Turkish breakfast thing wrong.

As with all travel, a visit to a new place involves a learning curve, and Istanbul is no exception. It's a city where it's best to take your time, and that is best exemplified at breakfast. Kahvalti is the Turkish word for breakfast, and its literal translation is "before coffee", because black tea is served before the meal and coffee is served last. In between is a variety of meze dishes; a series of gastronomic delights served on small plates, and an eclectic collection of foods influenced by Middle-Eastern, Central Asian, Mediterranean, Eastern European, and Balkan cuisines. It is the definition of fusion, due to the influence and far reach of the Ottoman Empire, and the result is unlike any meal you’ve had before.

Norah Ephron once boldly wrote that Las Vegas has the best breakfast buffets in the world, and while that may be mostly true, I am here to say that those buffets have got nothing on breakfast in Turkey. What you can expect is a spread consisting of cheeses, dips, jams, honey, pastries and bread, eggs, cured meats, tomatoes, cucumbers, and olives — so beautiful and tempting that it's near impossible to resist taking a photo. Never again will you have to choose between sweet and savoury: the universal breakfast dilemma.

Despite the lavishness of what sits in front of you, the point of this meal isn’t to test the limits of how much you can eat; instead, the focus is on sharing food and conversation over a meal that is more often than not neglected, eaten alone, or rushed.

Here are a few breakfast dishes not to be missed on your next trip to Turkey. And remember, the beauty of them all is that they are best together.

A beverage served all day and everywhere you look; you couldn’t miss it if you tried. Served in small, hourglass cups on saucers (which you’ll want to bring home), drinking tea in Turkey is a popular pastime and this tea, made from black tea leaves and slowly steeped, is an integral Turkish experience.

A staple of Turkish cuisine, this ring-shaped bread is crispy on the outside, chewy on the inside, and comes covered in sesame seeds -- The perfect accompaniment to the kaymak (clotted cream) and honey on the table.

This traditional egg dish is a Turkish take on scrambled eggs, consisting of green peppers, stewed tomatoes, olive oil, and spices such as black pepper and chili peppers.

You can’t visit Istanbul/Turkey without eating flatbread, and this Turkish pancake is a savoury specialty made with a variety of fillings, including spinach and feta, lamb, or spiced beef.

Pronounced "ah-joo-kah", this spicy spread is made of walnuts, breadcrumbs and roasted red peppers, garlic, and red chili paste. It has a bit of a kick, but not to worry, there is always a yogurt-based dip to balance it out.

The most common cheese found at breakfast, and for good reason. Commonly known as ‘white cheese’ it is similar in texture and flavour to feta, and whether it is served on its own or baked in a pastry or bread, it compliments everything else on the table.

Made from phyllo pastry, this flakey and delicious dish can be found on most menus, and is stuffed with beyaz peynir, spinach, or minced meat.

This unfiltered coffee packs a punch. There is a technique of swirling the coffee as you drink it to prevent the grounds from settling to the bottom, leaving the coffee weak. You know you’re done when you’ve reached the grounds (don’t attempt to drink them!) — and if you are feeling curious, you can have your fortune read from the remains in the cup.

Bonus points for the fact that this breakfast won’t leave you hungry a couple hours later while you’re out visiting the Blue Mosque, bathing at a hammam, riding the ferry along the Bosphorous, or exploring Topkapi Palace.

Check out our small group tours to Turkey