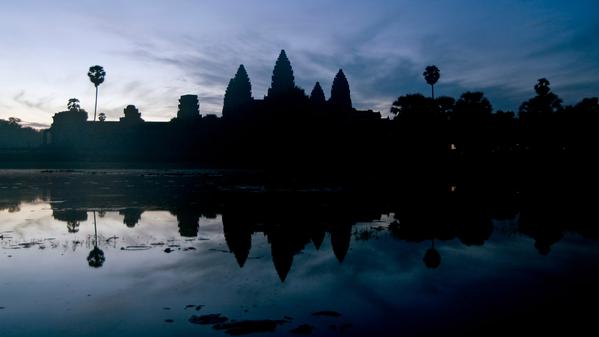 The true wonders of this world of ours don’t always squeeze easily into a few lines of text in a brochure. Today, we’re going on a fact-finding mission to Cambodia to meet its most majestic and mysterious temple complex, Angkor Wat

You can’t learn much about a city, a mountain, or a historic site from an itinerary (although we certainly do our best). The true wonders of this world of ours don’t always squeeze easily into a few lines of text in a brochure. Today, we’re going on a fact-finding mission to Cambodia to meet its most majestic and mysterious temple complex, Angkor Wat.

Now, the history books will probably tell you that Angkor Wat was “built” by Suryavarman II, one of the last great Khmer kings, but let’s give credit where it’s due. Sure, Suryavarman commissioned the complex’s design, but the thing itself was actually built by the hands of thousands of slave labourers. While he may not have been much of a champion of organized labour, Suryavarman was a big supporter of engineering and the arts. Architecture positively blossomed during his reign, and the sprawling Angkor Wat was merely the grandest and most durable representation of the classic Khmer architecture style he championed.

When he commissioned it, Suryavarman envisioned Angkor Wat as a grand future capital of the Khmer empire. Unfortunately, he didn’t live to see its completion, and construction of the project ground to a halt shortly after his death. (Some bas reliefs sculptures on the site were actually left unfinished.) That said, the incomplete Angkor Wat is still a sight to behold. The largest religious structure in the world, the site began life as a temple dedicated to Vishnu, the principle Hindu god, before being transformed into a site of Theravada Buddhist worship in the 13th century. Curiously, the site was built facing to the west rather than to the east like most traditional Khmer temples, a decision that still prompts lively debate among historians.

Construction began in the early 12th century and ceased sometime after Suryavarman’s death circa 1145-50 AD. Angkor Wat represents the peak of the classic Khmer architectural period, a time in which the kingdom’s architects had become considerably proficient and had selected sandstone as the primary material for their significant structures. Weather-resistant and porous yet remarkably easy to shape and sculpt, the stone played a significant role in the site’s survival through the centuries as well.

Perched just to the north of Siem Reap, the site’s location has played a significant role in transforming the city into one of Cambodia’s economic capitals. When Angkor Wat was “rediscovered” by French explorers in the late 19th century, it became an almost instant hit with tourists; seemingly overnight, the sleepy village of Siem Reap swelled into one of Cambodia’s largest and most modern cities. That rapid growth has been both blessing and curse to those who live here, resulting in a considerable gap in incomes between those who work in the tourism industry and those who don’t. (For a more nuanced look at the challenges facing Siem Reap and how you can be a part of the solution, check out Planeterra’s New Hope Cambodia Vocational Training Restaurant project.)

This is always the most important question: “Why does this thing exist?” With Angkor Wat, the jury is still out. Even after all this time, historians and archaeologists still aren’t entirely sure. We do know that Suryavarman commissioned the site as a temple to Vishnu, a somewhat unusual move at the time. The complex itself was designed as an earthly representation of Mount Meru – the Hindu kingdom of the gods – featuring a massive five-spired temple mount, a trio of rectangular galleries, and a moat designed to represent the ocean. But since no helpful inscriptions survive with even an official name for the temple (“Angkor Wat” is Khmer for “city of temples”), our best explanations for its existence are largely educated guesses.

Now this is a question we can definitely answer. For an up-close glimpse of Angkor Wat, Siem Reap, the incredible Tonle Sap biosphere region, and Cambodia in general, take a gander at our featured trips in the region. We can’t promise you’ll come home with the answers, but we guarantee you’ll have a blast thinking up new questions.