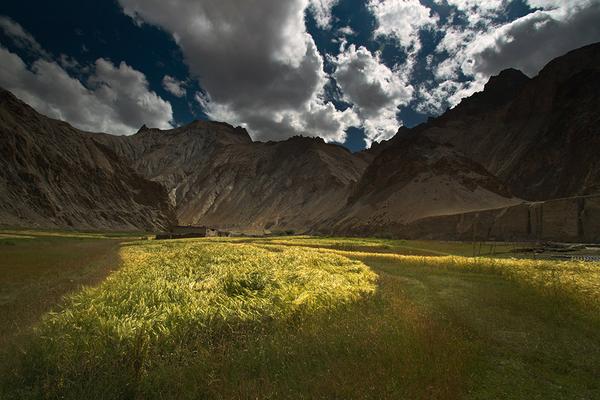 Harmony and humanity in Ladakh

Amid the whirring of prayer wheels and the muttering of mantras, guide book author and travel veteran Mark Elliott explores Ladakh's incredible appeal.

“So how’s business?” I asked the hotelier.

“Too many guests. Too busy. For Ladakhi, sometime busy, sometime not busy make good life, make time to see friends. But always busy, only money, where is life? No time for living.”

In one brief conversation he had summed up what makes Ladakh such a special place — life here is for living. With crystal-clear skies, rocky Himalayan pinnacles, idyllically roadless trekking villages and hillsides slathered with extraordinary Buddhist monastery buildings, there’s loads to see.

But more than anything it’s the human side of Ladakh that you’re likely to remember. Ladakh is simply different. It’s in India but not Indian. It’s culturally Tibetan but not Tibet. It’s religious to the core but with a Buddhism that is lived not preached. Winters are so harsh that all road access is lost for nearly half the year, yet this is a place of humour where even the road signs are a curious mixture of warnings, philosophical quotes, and cheeky double-entendres.

Many foreign visitors in India head to Dharamsala to hear about Buddhism. But come instead to Ladakh and you’ll see Buddhist spirituality infusing day-to-day existence. You feel it. It pervades everything from the way you walk through a village to the ingrained eco-awareness that long predates any Western green movement. Organic agriculture? Of course! Buddhist mores don’t encourage the peddlers of pesticides. In July 2016 as a plague of locusts ravaged the pea crops in southern Ladakh, government advisors came to dole out bug sprays. They were politely turned away. “We don’t want to start spraying our crops with poison and kill other creatures,” says Tashi, a local English teacher who is giving me a ride to see an archaic stone watermill — old technology as useful today as ever. “Let the locusts eat their share. There’ll still be plenty left for us to eat, just not enough left over to sell. But that’s only money.”

And there we have it once again — the crucial difference between Ladakhis and most other people on this little planet of ours. It’s a philosophy summed up by Maruti, a visiting “professor of life” who comes each summer to soak up the spiritual atmosphere in Leh: “People [around the world] are busy earning money but spending life. Here people just live more fully.”

Ladakhis are generally land rich but cash poor. The landscape is mountain desert, but centuries of laborious irrigation have created carefully watered terraces of emerald green barley fields that help feed most Ladakhis. Yes, money is needed for certain items, so tourism has its benefits. However, when homestay schemes were first introduced, one of the big lessons for villagers was a reminder that they should actually charge for their hospitality instead of simply opening their homes. Now a mainstay of the Ladakhi experience, homestays offer fascinating glimpses into local lives.

And what's the life they share with their guests like? The rooftop shrines. The long, hard summer days in the fields. Think of an evening flagon of chhang (barley beer) served from splendid copper vessels like Arabian coffee pots washing down a dinner of paba (barley meal) dipped in vegetable curd. And always the gentle whirring of prayer wheels, the muttering of mantras and the flapping of flags whose Tibetan letterings are messages to the gods carried away by the wind for the well-being of humanity.

Head for the hills on G Adventures' Trekking in Ladakh tour. We’re thrilled at the prospect of showing you this big blue planet of ours — check out our small group trips here.